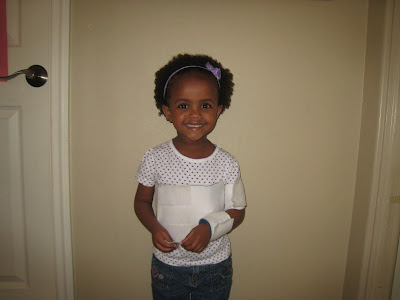 So we sustained our second fracture. We went six years without any broken bones and now we've had two in the past six weeks. My poor little Meron ran behind our tree swing just as Nick (who was swinging with Caroline) came swinging back. He never saw her, only felt her as he bump into her. She came into the house (I was making dinner) with a mouth full of mulch and a little bump on her forehead. I cradled her in my arm to hold her like a baby and she said, "owie mommy, this one" and pointed to her left shoulder. I just thought, "you've got to be kidding me." She was pointing to the exact same spot that Hermela had fractured several weeks ago. After evaluating her, I was pretty sure that she too had fractured her collar bone-which an x-ray
confirmed this morning.
I already had the brace from Hermela and tylenol with codeine-which is really all you can do for a fractured collar bone, but thought it was probably a good idea to take her in anyway to document the injury. I imagine it looks a little suspicious to have a mom bring her two daughters to the same clinic six weeks apart for the exact same injury-what are the chances? The doctor didn't ask any leading questions and said it is a fairly common bone for kids to break, so I don't think we're under investigation, but the thought did cross my mind. I'm sure that a lifetime of malnourishment has led to rather frail bones as well.
The only good new in all of this is that Meron is tough as nails and doesn't seem to be fazed by the whole ordeal. When I put the brace on her she said, "Hermela share, me all done me share Caroline." I told her that it was very thoughtful to want to share the brace with Caroline, but that we hope we don't have any more broken bones anytime soon. Praying for a speedy recovery for my strong little girls.
Posted by Jessica at 3:57 PM 4 comments: 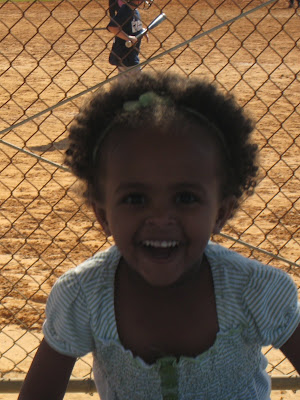 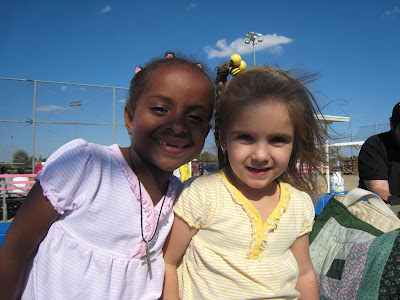 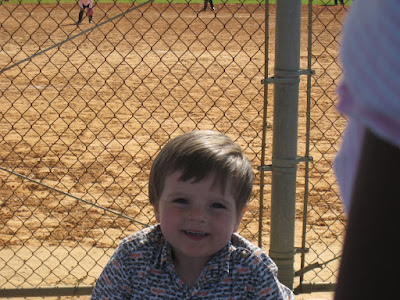 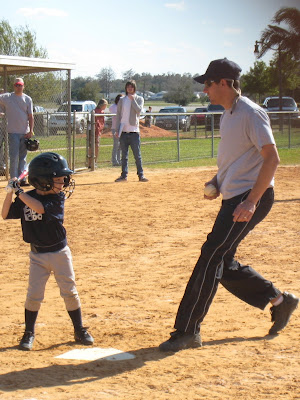 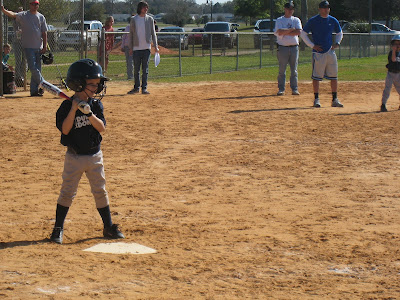 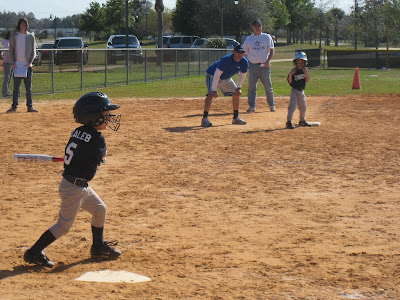 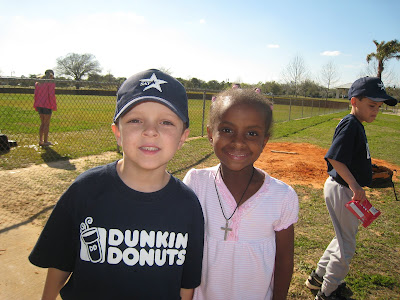 We are now into our Saturday game day routine. Caleb is playing coach's pitch this season and Nick is coaching (by default he says-the coach needed an assistant-but he is loving every minute of it). It has been a good bonding experience for Nick and Caleb.

The girls and Colton are keeping me busy in the stands. Thankfully, Caroline is friends with one of the players sisters, so this helps pass the time. Hermela said, "Caleb friends, Caroline friends, Hermela no friends" meaning she hasn't met any friends here yet. This is probably hard as she seemed to be well liked at the care center and friends with everybody. She speaks both Amharic and Tigrinya (the language that most of the kids who come from the Mekele care center speak) so I imagine she was a source of comfort for those children as the nannies only speak Amharic. Anyway, Caroline said she would share her friend. So poor Kaley had two little tails following her all around at he game. She didn't seem to mind.

Caleb got several good hits which thrills Nick as he is the pitcher and the team won 8 to 2.
Posted by Jessica at 10:24 AM 1 comment:

My best attempt at a group shot. 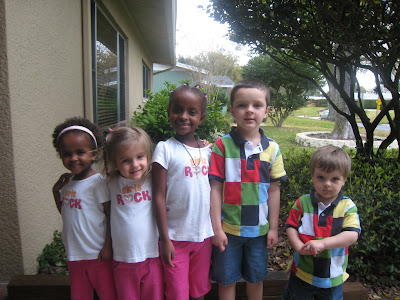 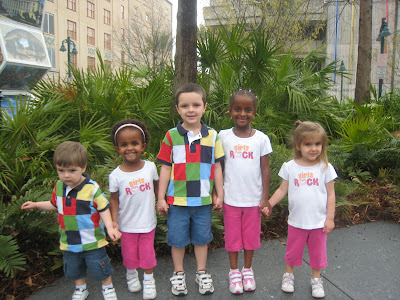 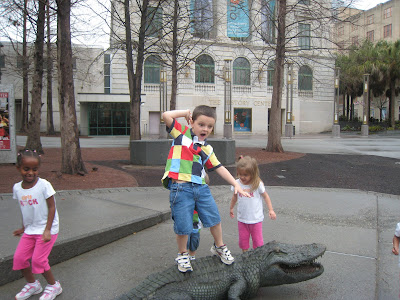 My big boy-growing up so fast, eating a big sandwich like the rest of the kids. 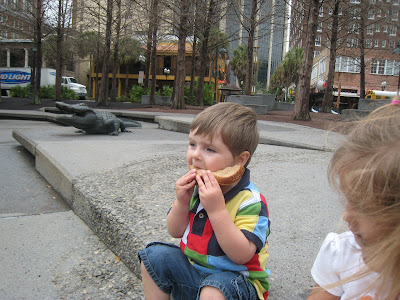 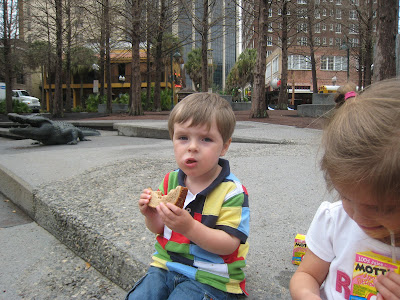 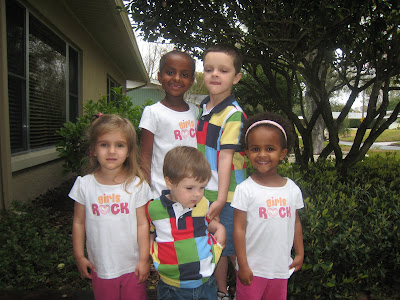 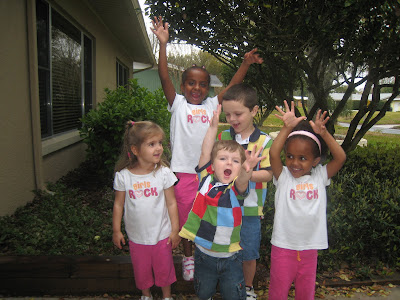 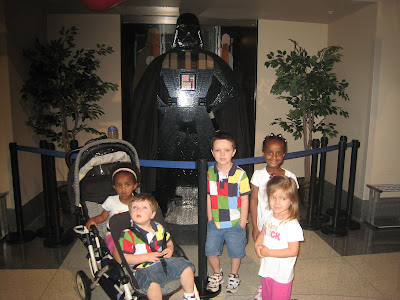 Meron on trial for being too cute! 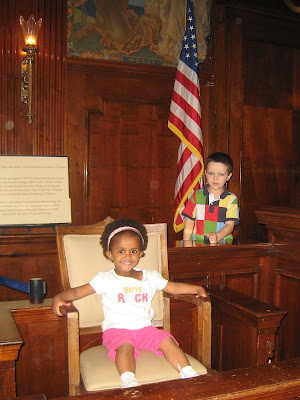 Order in the court. 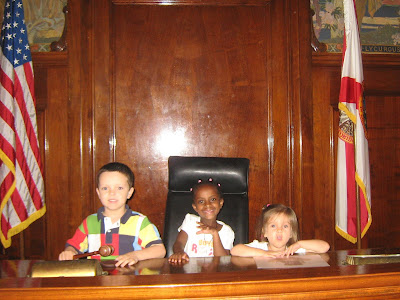 Thursday we took our first field trip with the girls. We've been learning about seeds and plants and flowers in school, so I wanted to take them to a local garden for the day. It's where Nick and I were married, so I was looking forward to getting a picture of all five of our kids standing in the same place where we stood when we said our wedding vows. Well, the weather had other plans. We had tornado warnings and rain, so we opted for plan B-the History Center. While it didn't really pertain to our plant unit, it was educational and indoors.

I realized that we really didn't even need to go to the History Center because just getting there was excitement in itself. As we pulled into the parking garage, Hermela squealed and said, "This one mommy, I like it" (the parking garage). We then got to ride the elevator-another "wow" moment followed by walking downtown and seeing all of the tall buildings. To top it all off, there were statues and a water fountain in front of the History Center. We finally made it inside and had fun exploring.

We always get looks and comments for a lot of reasons I guess. People are curious, "are all of those you're kids." Or one that I got at the grocery store this week, "are ANY of those your children?" I just smiled and said, "they all are" to which the check out lady said, "oh, ok" with eyes big and a puzzled look. I get, "you're a saint" (which I really don't like), and "what a wonderful thing you've done" to which I reply, "we are the blessed ones and lucky to have them." We get, "you sure have your hands full" almost everywhere we go to which I reply, "better than empty." We haven't had any negative comments yet, mostly just stares of curiosity, which I think is ok. I'm glad our family looks different. Hopefully, other people will look at us and broaden their definition of what a family looks like.
Posted by Jessica at 4:03 PM No comments: 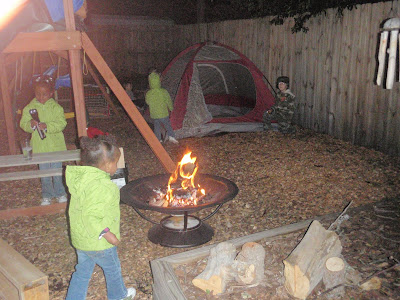 Nick and Caleb had their first camp out last weekend with our friend and his son. The girls and Colton hung out long enough to have smores and then we let the big boys hang out by themselves. The girls and I painted toe nails and did hair while the boys ate "lots of bad stuff" as Caleb put it (chips and hot dogs and more smores-definitely not the usual fare). They made it all night and we had pancakes for breakfast-always a hit. Nick asked Caleb what his favorite part was and he said, "dad, the whole thing was my favorite part". What more could you ask for?

Our camera broke a week or so ago, so I haven't posted since the video. Not to mention that the video took a lot of late nights to complete, so I kind of needed a break.

The kids are all adjusting so well. It is really more than we had hoped for. We've had some issues with tantrums, but that just seems so trivial. Can't complain about that and now that the girls know the consequences of their actions and know the family routine, we're having far fewer episodes. I found out last week that my most successful disciplinary action for Hermela is to restrict TV. The kids don't watch much TV anyway, but when they do, Hermela is as zoned in as Caleb. Those two are really so much alike. Hermela is partial to what we watch. They came home having watched the movie Madagascar, which we also have at home. All the kids loved to watch it and sing "I like to move it, move it". That was the request for a while, but now that they know other cartoons exist, they prefer "America TV" which means anything that they had not seen in Ethiopia. The other day, "Tom and Jerry" came on and Hermela said, "No mommy, this one Ethiopia, I no like this one" (which is fine with me, because I don't really care for it either). The current family favorite is Word World and recently Veggie Tales.

We were doing our bible lesson last week and it was about how God made us each special and how we are perfect the way we are. Hermela looked at me and rubbed her arm and said, "mommy, meh-teh-tah-beh-a (bath/shower), this one like mommy." She was telling me that she thought if she washed enough that her brown skin would turn light like mine. I told her that wouldn't happen and that God had made her with beautiful brown skin. She put her head down and said "no mommy". I explained to her that we had prayed and prayed for a little girl with brown skin and that God had sent us Hermela and Meron and we were so thankful for our beautiful little girls. After quite a long discussion, she seemed to understand and perked up. She now says, we're "leh-lah" (different) but "ishe" (it's ok). We've read several children's books ("A Mother for Choco", "Your Not My Real Mother"...) which have also seemed to help. It just makes me wonder if she was so excited to take baths because she was trying to wash her brown off.

I've said to Nick and a few friends that I really don't see them as being different from our other children. I look at them and I see my daughters. There is just no difference. These are our children as much as Caleb, Caroline and Colton. And, like I've said before, none of them are really "our" children, they are God's. He gives them to us for a time to raise for Him and we are blessed by this gift.

I feel like we've made it out of the initial "adoption fog" (kind of like the first weeks home with a new baby). Lately, I've just tried to sit back and enjoy our children and remember that even with all of the work that goes into each day and as tired as we are most nights, it is all worth it and it is an amazing opportunity to be able to raise these five little ones.